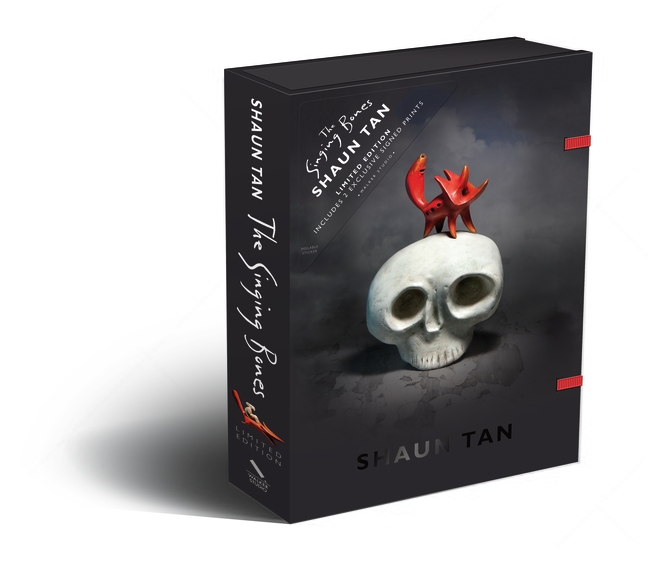 Artist Shaun Tan is world renowned for his singular vision and storytelling abilities. This art book showcases his sculptural talent, applied here to fairy tales from the Brothers Grimm. Tan captures the essence of these tales as he brings traitorous brothers, lonely princesses, cunning foxes, honourable peasants and ruthless witches to life in surprising – and illuminating – ways. Introduced by author Neil Gaiman and fairy-tale scholar Jack Zipes, The Singing Bones is a feast for the eyes, a profound, powerful celebration of the world’s most beloved stories. This limited gift box edition includes two exclusive signed and numbered prints.

Shaun Tan grew up in Perth and works as an artist, writer and film-maker in Melbourne, best known for illustrated books that deal with social, political and historical subjects through dream-like imagery. The Rabbits, The Red Tree, Tales from Outer Suburbia and the graphic novel The Arrival have been widely translated throughout the world and enjoyed by readers of all ages. Shaun has also worked as a theatre designer, a concept artist for Pixar and won an Academy Award for the short animated film The Lost Thing. In 2011 he received the prestigious Astrid Lindgren Memorial Award in Sweden, in recognition of his services to literature for young people. His most recent books are Rules of Summer and The Singing Bones.