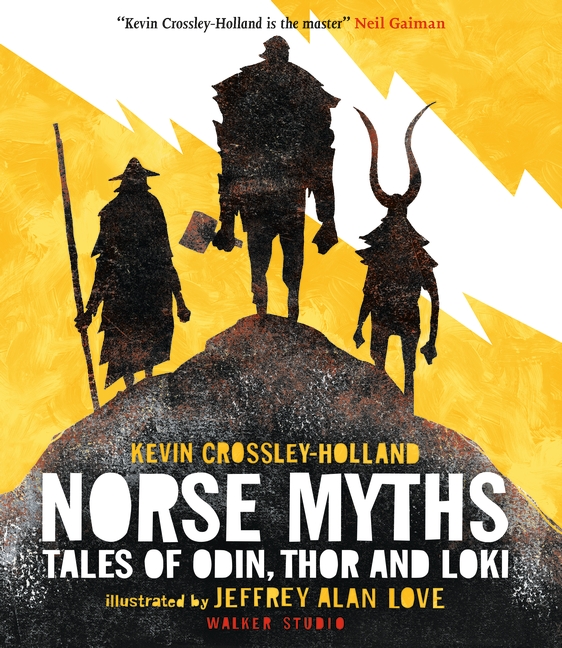 Tales of Odin, Thor and Loki

The gods of the Vikings come to life as never before in this extraordinary illustrated anthology by Carnegie Medal-winning author Kevin Crossley-Holland and artist Jeffrey Alan Love. These dramatic, enthralling and atmospheric tales are based on the Scandinavian myth cycle – one of the greatest and most culturally significant stories in the world – and tell of Odin with his one eye, Thor with his mighty hammer and Loki, the red-haired, shape-shifting trickster. In this stunning collection of myths, the strange world of ancient magic, giants, dwarfs and monsters is unforgettably imagined.

KEVIN CROSSLEY-HOLLAND is a Carnegie Medal-winning author and a well-known poet. The Seeing Stone won the Guardian Children's Fiction Award, the Smarties Prize Bronze Medal and the Tir na n-Og Award. His Arthur trilogy has won worldwide critical acclaim, sold well over one million copies and been translated into twenty-five languages. He has translated Beowulf from the Anglo-Saxon, and his retellings of traditional tale include The Penguin Book of Norse Myths and British Folk Tales. He lives on the north Norfolk coast in East Anglia.

Jeffrey Alan Love is an award-winning artist and writer. Nominated for the World Fantasy Award, the Chesley Award, the British Science Fiction Award, The British Fantasy Award and the Spectrum Fantastic Art Award, he has also won a gold medal from the Society of Illustrators and two Academy of British Cover Design Awards. He lives in the USA.