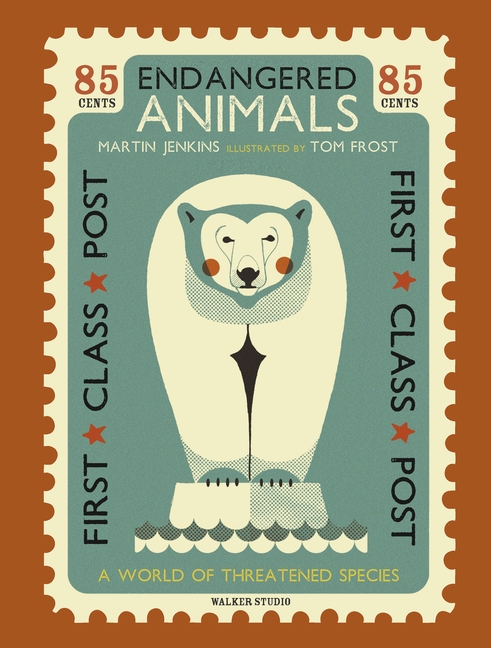 Discover animals under threat all over the world in this beautiful gift book from conservation biologist and award-winning author Martin Jenkins.From the mighty Asian elephant to the tiny rosalia longicorn beetle, creatures all over the world are under threat like never before in human history. In this timely book, conservation biologist and award-winning author Martin

From the mighty Asian elephant to the tiny rosalia longicorn beetle, creatures all over the world are under threat like never before in human history. In this timely book, conservation biologist and award-winning author Martin Jenkins introduces just a few of the species under threat, exploring why they are in danger and how we can help them. With striking graphic stamps from printmaker Tom Frost, this is a beautiful and illuminating journey through the world of endangered animals.

Martin Jenkins is a conservation biologist by trade. He worked for ten years for World Conservation Monitoring Centre, writing about a range of conservation issues, and since 1990 he has worked freelance for organisations such as WWF and a number of UN bodies concerned with conservation and the environment. Martin's jobs have varied greatly: "I've been an orchid-sleuth in Germany, a timber detective in Kenya and an investigator of the chameleon trade in Madagascar." Martin has written many children's books, including Emperor's Egg, winner of the Times Junior Information Book of the Year Award and Fly Traps! Plants that Bite Back, which was shortlisted for the same award. Martin lives in Cambridge.

Print maker and illustrator Tom Frost graduated from Falmouth College of Arts in 2001 returning to his home town of Bristol to work as an illustrator for a number of years. He now divides his time between print making, restoring his crumbling Georgian house in rural Wales and raising a young family. In recent years he has worked with clients including The V&A, Perry's Cider, Art Angels, Freight Household Goods, Selvedge Magazine, Nomnom Chocolate, Barti Ddu Rum, Quadrille Books and Yorkshire Sculpture Park. His work highlights a fascination for old matchboxes, stamps, folk art, tin toys, children's books and the natural world.